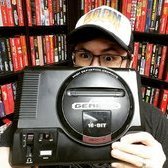 I picked up an NES lot last year and the guy gave it to me in this box...I was more excited about the box itself than the games I got!  Now it lives on my Nintendo tv stand thing and is used to store

For a number of years I got the majority of my games there used since I was too young to make my own money and my parents refused to buy me most of the games new. But one particular trip to the store

I remember saving up for Double Dragon 3.  I would call once a week when I got my allowance to see if the price changed, I made they guy tell me exactly what it would cost with tax. It was expensive,