11/10/2019 - This project is dead, but I wanted to port it over. This was the first game I tried to make after the Nerdy Nights tutorials. happyhourbeta.1.nes Happy Hour was my first attempt 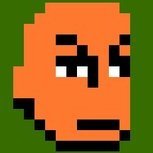 I remember when you were working on this 😄 Glad you are preserving all of your old stuff!