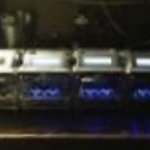 You would think with the multiple third party choices out there that the prices would go way down but no. It's considered a trophy piece so that's why they are still expensive IMO.