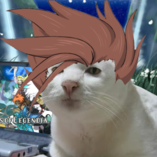 Few latest monster movies and also snagged Redline cuz everyone has been talking it up and was only 8 bucks on Blu-ray! Watching Gurren Lagann right now but will check it out after! 😋👍