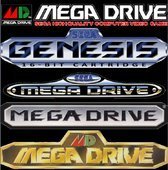 It seems there is also an Elemental Master  A-031

On another note, why should we care about these games? Aside from assembling a list of a series of bootlegs by id code, for the sake of information itself ( I've never seen anyone else documentin