NES - Matrix Rotation of a Cube 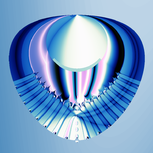 Hello all,  Working on some demo coding ideas. Naturally some pseudo 3d was something I wanted to do.  This was my inspiration for making this: https://www.youtube.com/watch?v=p4Iz0XJY-Qk Thi

Coming from a non-Assembler, non-Homebrewing programmer... I'm having a tough time trying to put into words what's going on and a possible solution.  The issue is that you are using an 8-bit CPU

You simply must realize the truth that there is no cube. The cube does not rotate, you do. 🙃