By Joyomofrobro
December 14, 2020 in The Gauntlet 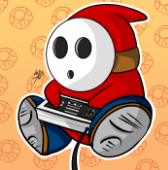 I'm pretty surprised that they had the bootlegs (do I use the word correctly?) done that good in the 90s. Even today most bootlegs are of much cheaper quality. I guess in the 90 you could sell somethi

The store Video Game Trader in Calgary Alberta Canada provided me system at location. I know nothing about this 'Super 168 in 1' cart 1994 collection for play original Game Boy!

I'd like to see the cart if that's at all possible.  I do like your whole kind of lit up mega man themed handheld though with the better screen dropped into it.  It's similar to some of the work I do,