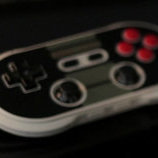 So I started my video game collection knowing I would have limited space since I was moving into an apartment with my wife and twin toddlers. I made a goal for myself: to get the games that mean the m

Congrats! Hopefully someday you can display all that cool stuff!