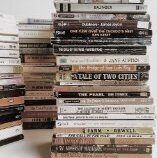 By SailorScoutMandy
October 20, 2021 in Reading Ideas

Right. I started the series and read if off and on the last few years. I think it's funny and easy reads. I'm on number #12, but Always up for a reread.

I should be done with Words of Radiance in time to join the November book.