Unofficial, like the racermate II. Still can't believe I got this.  Uses a real golf ball and club to play. 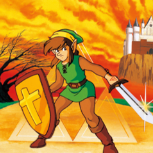 Sewing machine never came out though. We just have the ad sheet Howard Phillips posted

This one is a novel "turbo" peripheral for NES.  It's all mechanical/gear driven. You insert a controller and roll the unit like a toy car which rotates the gears and quickly taps the buttons.