I haven't seen this posted anywhere else, apologies if there is a different thread. Massive portion of the date for the 1997 version of Zelda 64 has been discovered inside of an F-Zero X prototype. On 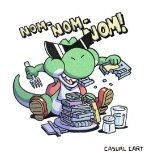 This is super neat. Glad this got found.

This is all completely different than the Gigaleak. Basically the main thing found in the Gigaleak was the dungeon with the tongue statues (and the old Kokiri Forest). Most of what is in this video ha