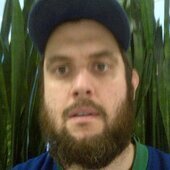 Yes, this is my observation as well. Technically, modern homebrew titles are unlicensed games just like the original Wisdom Tree games. GB or GBC, the Wisdom Tree games are the only ones I'm aware of