I think I made a thread about this on Nintendo Age but it's probably lost somewhere and I've gained new info since then anyway. So I finally got a boxed Samurai last year and it could be CIB. The

@bowser amazing find with the SMB manual. "What this means is that the initial batches were imported as fully assembled units from Asia." This isn't necessarily true. They could have (and most 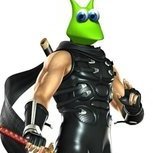 I'm the buyer of the Asian + Samurai cart.  As far as I can tell, @bowser is right, it's a first edition Asian cartridge with the Samurai sticker on the back on top of the original one, as you can see