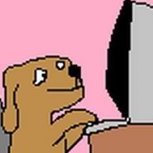 This is the sort of thing I mean It seems like it starts the game on the 3rd act, or like it's a sequel. And it's definitely not the only game like that. This is the original Japanese p