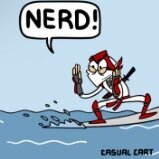 It isn’t just outrage culture with purely modern video games, but I believe it’s outrage culture relating to the combo of human beings and social media.  There are individuals among us who find i

Maybe I’m just getting too old to care, but wow I’m tired of the outrage culture in modern gaming. Damn near every announcement is met with hordes of pissed off commenters, and it’s been especially ba

He says, surrounded by old men whose entire personality is "I COLLECTED EVERY SINGLE NES GAME (except that one expensive one)!".