The History of Sunsoft [history research] 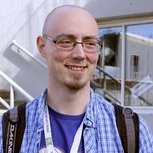 In the summer of 2015 I started researching the history of Sunsoft. I was doing a podcast that in some part included video game history and I was going to do an episode on Sunsoft and five of their NE

They lost the The Terminator license because the game they more or less finished before showing anything to the license holder was not following the movie. The movie is mostly set in "the present" whi

I have finally gotten in touch with one of the main developers of Journey to Silius. It's extremely satisfying to finally have answers to some questions about the development of the game.