Unusually nice pick up in Petaluma! 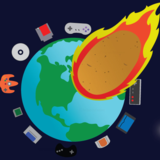 Made a really nice pick up down in Petaluma! Didn't expect to find this much stuff, and oddly a lot of rare PAL CIB NES stuff! Some of the oddball ite