Toilet paper. As @Gloves mentioned now is a good time to invest in a bidet. Maybe toilet paper will be a thing of the past. 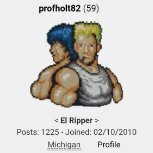 My money's on the 3 seashells becoming the next big thing.