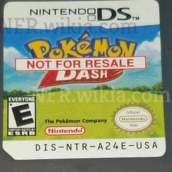 Not For Resales/Demos Collectors Club

Here is my favorite NFR collection. It was so difficult to get to this point with all of them being near mint to mint since most of N64 are not in the best condition. Required so much time and effort.

Let’s get some collection pics going! I’ll start with my favorite subset: pokemon distribution cartridges. This photo isn’t quite up to date for my collection, but you get the picture. This is all the

Here is one of the cooler items in my collection! Although I can’t read japanese and have no idea what any of this says, the cart plays a Japanese pokemon ranger demo. It is quite interesting to me th